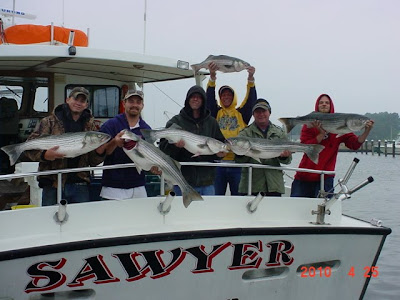 The Chesapeake Bay fishing action continues to be hot and heavy, as the folks pictured above limited out on Maryland striped bass! This was a great group of folks who drove down late at night to get here, and were almost turned back by heavy rain and winds. We almost sent them home, but instead decided to wait it out a bit. We ended up going and as you can see, it was more than worth it! Even though there were heavy winds out of the southwest, we had a steady flood current making conditions bearable. We also had to deal with restricted visibility. However, as soon as we got there, the stripers were ready to rumble, as we started catching right away. Toward the end, we had four on at one time, and landed them all! What a great day of fishing!
Posted by Capt. Dave Schauber at 8:00 PM 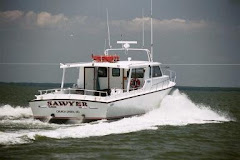